The state of art spray kit is being used to link offenders with offences by coating their vehicles with ‘selectadna’, a solution of unique DNA code and UV marker.

The substance is invisible to the naked eye and almost impossible to remove.

“This DNA spray is just one more step in tackling the crime and antisocial behaviour caused by nuisance motorcycles and continue to look at new innovations and ways in which to reduce the impact of anti-social riding of motor cycles.”

The new initiative already seems to be a success.

Yesterday, officers confirmed that a stolen motorcycle had been recovered in Grimsby after being sprayed with selectadna.

A spokesperson for Humberside Police tweeted: 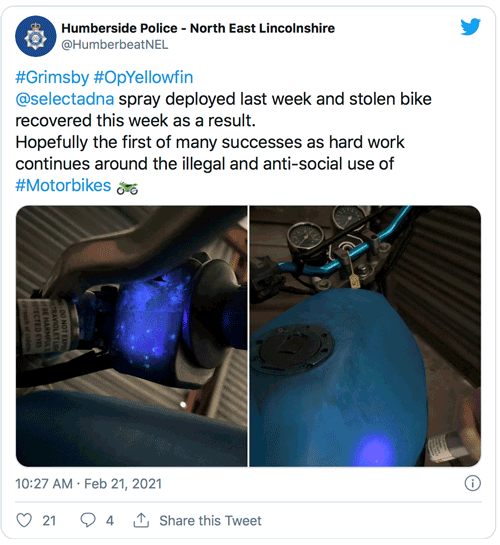 “This is another really good example of work we are doing to reduce the number of motorbikes, mopeds and quad bikes ridden unlawfully in our area,” Inspector Hopper continued.

“Having spoken to so many of our local residents through Humbertalking we know it’s an area that really concerns them and we are committed to tackling this issue.

“Introducing this new technology will contribute to reducing anti-social behaviour and criminal activity and will, most importantly, reduce the nuisance caused to our communities.